Making of the Phantom "Valentino" Wig

A key part of the Phantom's signature look in the Andrew Lloyd Webber musical is that sleek hairstyle reminiscent of Rudy Valentino.  This extreme, slicked-back style is not difficult with the proper type of short, straight hair, but for those of us not willing or able to do that to our own hair, a wig must be employed.  Please see below for how I created two full replica wigs, as well as what options you have regarding hair and wigs for your own Phantom of the Opera costume/cosplay. 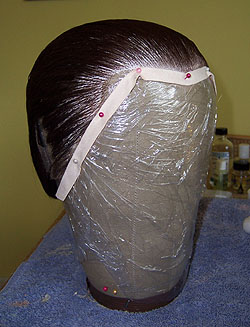 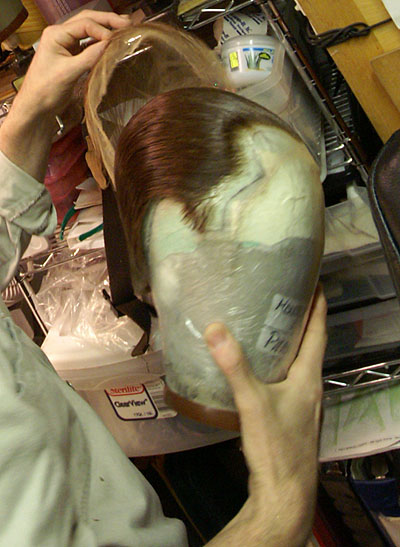 Wigs are used throughout the various productions of Phantom to get this particular look.  These hairpieces are custom made/tailored for each actor.  Because of the nature of that slicked-back style, they must be hand ventilated (hair tied by hand onto the lace foundation) as the front hairline must look completely natural.  As a result, they are neither cheap nor easy to recreate.  Fully ventilated, professionally made wigs can easily go for upwards of $3,000 depending on style, types of hair, etc.  I decided in the spring of 2007 that I would take this project on in time for the Halloween season, at the time knowing nothing about wig making.  I educated myself to the best of my ability through books, online tutorials, video resources, and talking directly with professionals and amateurs alike.  By the time August rolled around, I had struggled to make a lace foundation and had begun the ventilating process in my spare time.  After a painful week of stabbing myself repeatedly with the ventilating needle, I had finally begun to get the hang of it.  Professionals often state that a fully ventilated wig can take around 40 hours to construct, sometimes more.  Given my complete lack of skill I figured on 80.  Truth be told, I lost count; I did start at the end of July, and by mid-October the wig was completed.  Scary notion, isn't it?  Keep in mind I did not work on it everyday.

The Process
The process of wig making involves more than just putting hair onto the foundation.  It starts by taking a head cast of the subject, to accurately duplicate not only their hairline, but the shape of their head.  A head cast is made by by putting a clear plastic wrap over the person's head (for those with long hair, the hair must be put up in a wig cap as it would be worn under the wig to ensure proper fit).  Clear tape is then layered over the plastic wrap to form a cast.  From there, the head cast is placed onto a wig block and the wig maker begins planning the actual wig.  Ventilating is the process of tying the hair to the foundation material, which is typically a strong lace.  Also known as hand knotting, ventilating is a highly labor intensive process.  A special needle (also known as a knotting hook) is required in order to grab the hair and tie it to the foundation.  You can learn more about this process by visiting the following links:
Wig making at Makeup-FX.com
YouTube Feature:  How It's Made - Lace Wig
YouTube:  The Art of Ventilating with Ricky Greenwell

The canvas head block is extremely useful.  I suppose you could always use a Styrofoam head block if money was a concern, but at $30, I figured the canvas blocks were a great investment.  The foundation material you choose is vital to the durability of your wig.  I've heard of people interesting in doing their own hairpieces by using flesh colored tulle - this is indeed possible as tulle is a similar size and shape to wig lace, but in my opinion it is a very poor substitute!  Tulle, like wig lace, comes in a variety of shapes and sizes (based on the size of the holes).  However, I think it is a much weaker material.  I purchased a bit of tulle in 2007 when I first started.  I made a foundation out of it for practice, and tried venting some hair onto it.  For the most part I found it hard to do so without pulling the fabric out of shape.  Tulle stretches and can also be easily torn compared to the stronger wig lace.  So I ended up deciding that it was indeed worth it to spend the money on proper wig lace as a foundation material.  My wigs are constructed entirely off of fine, film quality lace.  There are several sizes of ventilating needles available (one through seven), based on the number of hairs they are designed to grab.  I have a size one needle for use on the front hairline, and a size five for pulling upwards of five hairs at a time.

The hair I chose to use was #2 dark brown Indian Remy hair.  It is not as high a quality as the ever so expensive European hair, but it is excellent considering the price.  I've heard poor things about using cheaper Asian hair, and given my budget, European hair was out of the question.  The Remy fit in nicely as a middle of the road option, and I've had absolutely no complaints regarding the quality of the product.  The different types of hair refer more to their texture and quality, not necessarily where in the world they come from.

Results of the First Wig
Considering I had no wig making or hairpiece experience at the time, I think this project came out well enough.  "Valentino 1" was a success, but having gained knowledge and insight as I completed it, I began to notice what I had done wrong.  First off, I had not accurately drawn my hairline when doing the initial head cast.  As a result, the hairline of "Valentino 1" is off; one sideburn is slightly longer than the other, and because I used a wig block of a slightly larger diameter than I should have, it did not match the shape of my actual head.  Perhaps the biggest mistake I had made was ventilating too thinly across the top and front of the wig.  I had to take to wearing a black wig cap so that the wig would look more full. 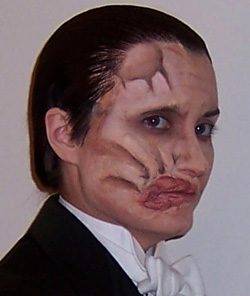 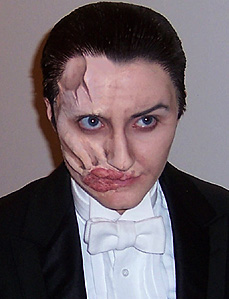 Valentino v2.0 (aka "V2")
I wanted a chance to learn from the first wig and correct the mistakes I had made, so I resolved to construct another in the spring of 2008.   Unfortunately, this project sat for many years, barely started, before I was able to pick it up in 2015 and finish it.  I made a new, more accurate head cast, corrected the hairline, and ventilated the hair much more carefully (thicker) than in V1.  As a result, the hair cover on V2 is much better, the wig looks full, and will be a far more accurate replica wig than my first one.  I finally got better at the ventilating process as well (that only took about 120 combined hours!) part way through V2, which made the ventilation a bit more tolerable on the latter half of the wig.  Please see below for a video of the partially completed wig from this summer (2015) to learn more about it and see the ventilating process. Pictures of the completed wig are below as well. 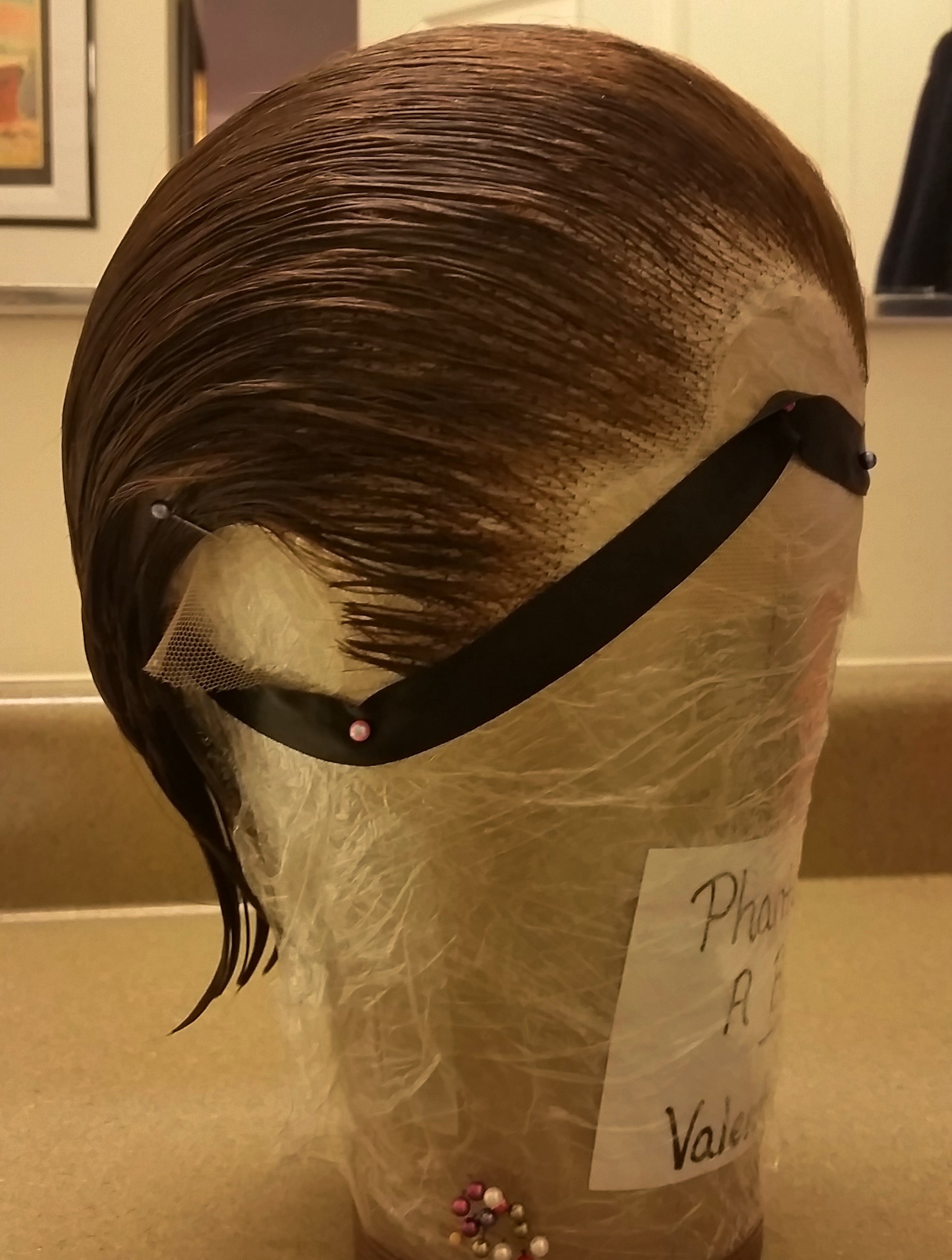 "Will you make the alopecia wig?"
In the Lloyd Webber stage musical, the Valentino wig is removed, revealing the Phantom's "real" scalp, which is practically bare save for some thin and patchy hair (see the McGillin wig photo above).  The actor playing the Phantom wears two wigs over the bald cap to achieve this effect.  While I could easily make an alopecia (the term used to describe that condition) wig, but since I do not use a bald cap in my makeup (too difficult to realistically apply by myself), I would never have the chance to use it.  So no, I do not intend on ever making an alopecia wig for my Phantom cosplay.

Hair and Wigs for Your Phantom Costume/Cosplay
I've already had a few people ask me about the wig making process and how to go about it, which is why I created this page.  This style of wig making, again, is highly laborious, so it should not be taken lightly.  There is a certain level of commitment to it, since it requires so much tedious work.  The materials also are not entirely cheap; yes, they are a fraction of what one might be looking to spend on a professionally done wig, but if you were looking at doing this, you'd still be looking at about $200 or so just in materials.  I honestly only suggest making a fully hand tied lace wig if you want a truly 100% accurate stage costume replica.  Otherwise, there are far more affordable and realistic options available to you.

Most people simply style their own hair, or buy a costume-grade wig from a Halloween/costume store.  Those can run anywhere from $20-$80, depending on the type of wig and the material it's made out of.  The downside of costume-grade wigs is that they have a blunt, unrealistic looking hairline that is not well suited to the Phantom's slicked back style.  You could theoretically create your own custom hairline on a commercial wig by installing a lace piece to the front, and venting hair onto it.  This is also labor intensive, but not nearly as bad as making a full wig from scratch!  These days, lace-front wigs are much more common and much more affordable, often selling for $200 or less for a quality lace front, synthetic wig.  I think today's lace-front wigs are a great compromise of cost and style, and that is where I suggest you begin if you want a pretty realistic wig, without having to spend a great deal of time or money.

Comments or questions regarding the Valentino wig?  Feel free to email me at Phantom[at]phantomonabudget[dot]com.